With the exception of encountering Sara Pezzini in a couple of my funnybooks, I have managed to avoid everything Witchblade. That’s no small feat considering it’s a fairly prolific franchise, which even managed to bust out of the comics and onto the TV screen. Nonetheless, I’m a big fan of Clayburn Moore’s sculpts and so I just so happen to have a lot of Witchblade figures in my collection. Today seemed like a good day to feature one, because I have an appointment at the corner pub and with so little background on the characters, I can probably get through it quickly.

If you’ve picked up any of Moore’s indie comic figures, you have a good idea what to expect from the packaging. The figure comes on a fairly uninspiring card with a big bubble and the figure and accessories all laid out for you. The back is a little more exciting with some decent artwork, a blurb about the character, and photos of four of the other figures available in this series.

Even if you aren’t a sculpting connoisseur, chances are you can recognize a Moore sculpt when you see one. Most of them are scantily clad ladies with ample breasts, a perfect ass, and a wide-eyed, full-lipped featured face. Katarina here hits all those points. Her face does have less of a realistic look and more of a stylized anime visage than Moore’s usual work, certainly more so than Lady Death or Ariel Darkchylde. I don’t like it as much, but I’m certainly not hating on it either. I do really dig the way her long braid snakes its way down her back and around to the front. The sculpting on the Witchblade itself is both beautiful and intricate and it makes for a striking contrast with the figure’s smooth skin. The crosshatch pattern on her boots is actually sculpted in and there’s some subtle but nice sculpted muscles as well.

While rarely poor, the paint on Moore’s figures can sometimes be a mixed bag, and Katarina here is a good example of that. The skintone is glossy bare plastic, which doesn’t give you the nice soft look of painted skin. I’m always torn on this, as I like the glossy toyish sheen and painted skin doesn’t always turn out that great. On the other hand, the bare plastic skin doesn’t photograph as well and doesn’t give you that added sense of realism. Nonetheless, the paintwork that’s here is pretty good, particularly on her face, her outfit and the Witchblade itself. The hair, on the other hand comes off as a little hamfisted. The mix of orange with black wash doesn’t give it depth as much as it just makes it look dirty. I seem to recall having a similar problem with the Darkchylde figure. Then again, considering the price point on these figures, the good certainly outweighs the subpar. 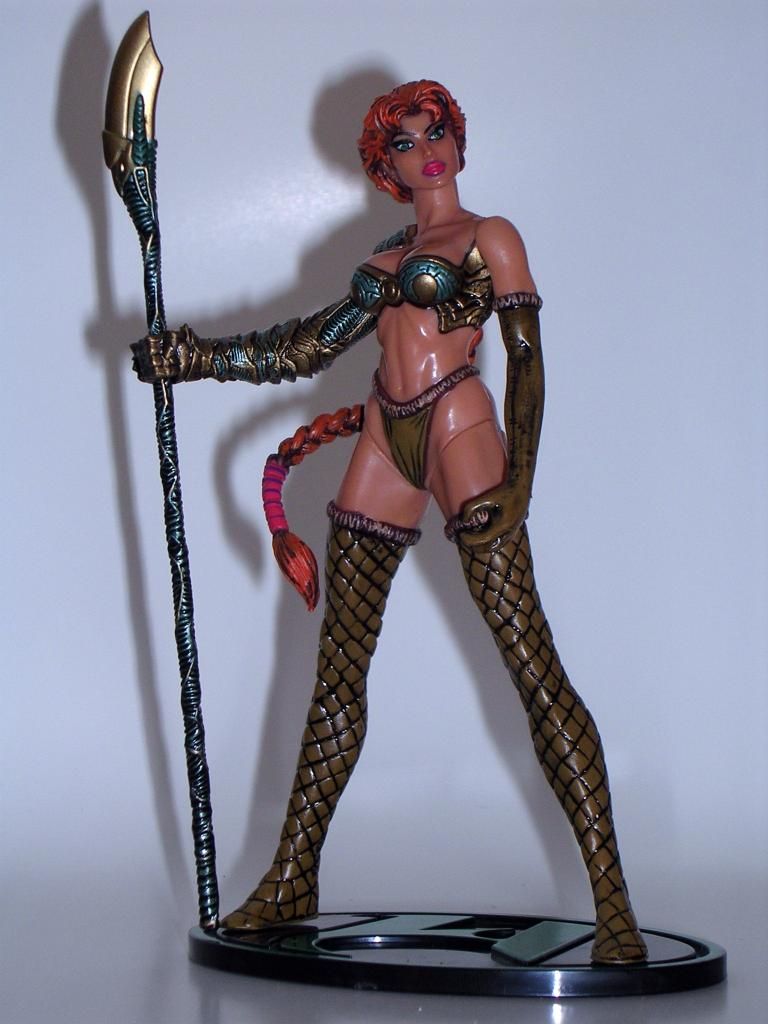 Moore figure collectors won’t be surprised by Katarina’s articulation. You get standard five points, swivels at the neck, shoulders, and hips, and only three of those are really useful. The hip cuts don’t really help at all, unless you want her awkwardly sitting on the floor with her legs spread wide. If you find that useful, please keep it to yourself while I pretend to be appalled. No, this figure is designed to stand in a wide leg stance and give you a few options on how to pose her with her weapons. 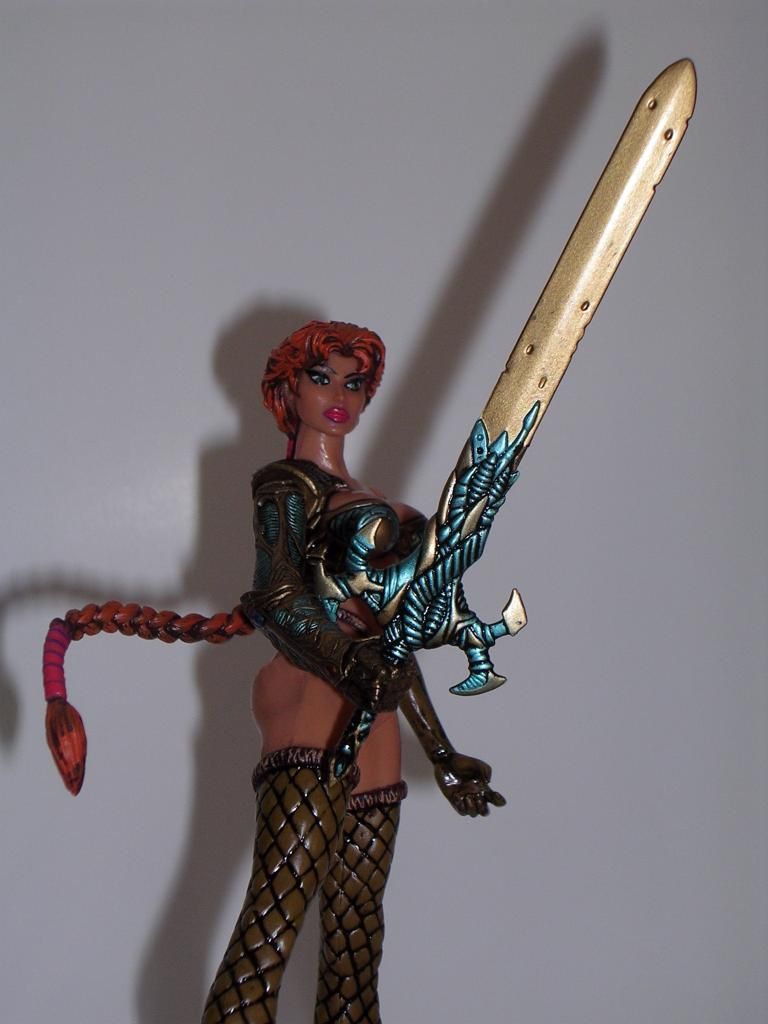 Weapons? Yes, Katarina comes with a nice array of accessories. You get a sword, spear, and battle axe. All three are beautifully sculpted and painted to look like extensions of the Witchblade. I’m particularly impressed with the sword sculpt, which includes all sorts of cool little nicks and pitting on the blade. Oh yeah, you also get a decent figure stand with the Witchblade logo on it.

A lot of collectors look down on Moore’s indie comic figures as being dated products of the 90’s. Fair enough, but I really enjoy them. One of the finest compliments I can pay an action figure line is that I’m willing to collect them when I really care nothing for the franchise they’re based on. Of course, it helps when they’re sexy chicks and when they’re cheap.  Witchblade figures can certainly be had for next to nothing these days. They’re probably still hanging in a dark corner of your local comic shop, or you can just go buy them on Ebay and probably pay more for the shipping than the actual figure. Either way, Katarina’s a cool figure in my book.